[Versión en español] The premise of systemic alternatives is that the environmental, economic, social, geopolitical, institutional and civilizational crises are part of a whole, are interrelated and feed into one another. Therefore, it is impossible to resolve one of these crises without addressing the others in a complementary manner. One-dimensional strategies are incapable of solving systemic crises and, on the contrary, can aggravate them.

Systemic crises are caused by a set of factors such as capitalism, xenophobia, racism, patriarchy, extractivism, anthropocentrism, plutocracy, productivism and colonialism. A systemic alternative seeks to confront and overcome the structural causes of systemic crises.

An alternative may begin by engaging one or some of these factors but acquires a systemic dynamic when it pushes forward and advances to challenge the other factors that also contribute to the underlying causes of the systemic crises.

When can we say they are systemic alternatives? When those alternatives become multidimensional and start to challenge capitalism, productivism, extractivism, patriarchy, anthropocentrism, plutocracy, xenophobia, colonialism and other structural factors of the systemic crises.

The most important way to define a systemic alternative is to determine where it is heading. If it remains in the one-dimensional framework, for example proposing only renewable energies, it is an alternative in relation to fossil fuels; but it is not yet a systemic alternative. The moment in which this proposal begins to state that the problem is not only the source of energy but also who controls it and how it is produced, distributed and consumed, it begins to have a broader and systemic dynamic that starts to question in a certain way capitalism, productivism and extractivism. However, the process of building a systemic alternative has to go even further.

If we take for example the issue of water, the recognition and implementation of the human right to water is an alternative, but it is not enough. To be systemic it must question the privatization and commodification of water as well.

The global water crisis cannot be addressed without overcoming extractivism, productivism and consumerism. Mining uses huge amounts of water and leaves rivers and ecosystems polluted. The large agro-industry is the sector with the highest water consumption. A kilo of meat requires 15,000 liters of water. Without sustainable agroecology and changes in consumption patterns, it is impossible to face the water problem. The manufacture of a car uses 148,000 liters of water. Productivism, whether under a capitalist or socialist logic, is a serious factor that must be confronted in facing the world water crisis.

Water can’t be managed only within statist logic with a top down approach. Different human groups in the countryside and the city must be involved in water management, promoting the practice of the commons.

The issue of water and basic sanitation exposes in a very visible way the patriarchal system. On the planet hundreds of millions of women walk more than an hour every day to collect water. The lack of basic sanitation and the necessity of attending to bodily functions outside the home is one of the factors that aggravates sexual aggressions and rapes against women. According to the World Health Organization in the world there are 2.1 billion people who do not have access to safe drinking water in their homes, and 4.5 billion lack safe basic sanitation. This extremely critical situation is getting worse with climate change. Women spend more time than men in water related tasks, in agriculture, cooking, cleaning and family health. However, in general, women are subordinated in water management structures at various levels. The construction of systemic alternatives requires the feminization of water management in all instances.

Water management must be comprehensive and encompass not only the human dimension but also the preservation of the vital cycle of water. To guarantee the human right to water it is necessary to recognize and secure the rights of water. It is fundamental to consider water not as a simple resource, as an object, but to recognize that water is a subject that in its different forms of river, snow or ocean has the rights to flow, to not be contaminated, to live and give life.

If rivers are subject to rights then this must be reflected in the exercise of democracy in our municipalities, provinces, states and within international integration organizations. A real democracy, for example, must include representation mechanisms for water. An anthropocentric democracy can’t solve the systemic crisis of water.

The continuation of capitalism, globalization, anthropocentrism, patriarchy, extractivism, xenophobia and productivism is a source of increasing conflicts and wars over water. Water will be one of the most determining factors in geopolitical disputes between countries, regions, social sectors, and ethnic and religious groups. Water does not recognize borders and its existence raises the need to rethink the boundaries of nations, and to move towards a shared management of watersheds. The global water crisis requires a new kind of international integration that is not dominated by capital and the geopolitical ambitions of the elites of nation states. 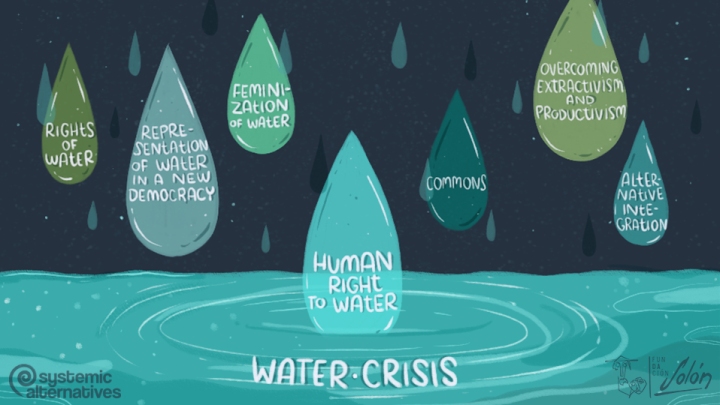 An alternative can be multidimensional yet not systemic. The capitalist, patriarchal and neocolonial system also develops multidimensional proposals to adjust to the new realities in order to preserve its existence. There are alternatives that are born with an anti-systemic dynamic but are captured by the system. This is the case, for example, with the green economy that in its origins promoted a different relationship with nature but now has become a new way to commodify nature through initiatives such as REDD+ and payment for environmental services. In other words, a seemingly systemic alternative isn’t guaranteed of retaining its anti-systemic character for life. Everything depends on its dynamics, the process it follows, how it is implemented and how it evolves, adopting new perspectives and deepening of its own approaches in ways that fundamentally address the different factors of the systemic crises.

To build systemic alternatives, it is fundamental to start from the changing reality and from the theoretical postulates and practical experiences of different visions and approaches such as the commons, degrowth, Vivir Bien, eco socialism, the rights of Mother Earth, ecofeminisms, food sovereignty, just transition, deglobalization and many others. All these proposals are very valuable, but none alone can address all the complexities of systemic crises. To forge systemic alternatives all of these approaches need to engage in processes of complementarity. Complementarity means to complement one another to form a whole, one that responds to the complexity of the problems we are facing. A process of complementarity requires we learn from the visions of others, to see through the postulates of the other’s proposal, to discover the strengths of others, to explore one’s own weaknesses and the gaps that all visions share, and above all, to think in terms of the totality of the whole.

One thought on “What are systemic alternatives?”